Kyle Okposo and Projecting the NCAA to the NHL

Share All sharing options for: Kyle Okposo and Projecting the NCAA to the NHL

Kyle Okposo made a few headlines this week: after the World Junior Championships are over, he's quitting the University of Minnesota and joining the New York Islanders. He was drafted 7th overall in 2006, which puts him a bit behind the curve in jumping to the NHL: he's the only player in the top 15 who hasn't played professional hockey. His former teammates Phil Kessel and Erik Johnson are playing regularly in the NHL.

So the question is, if the Islanders keep him in the NHL, what can we expect from Okposo for his next 40 games? This chart shows the ratio of NHL points-per-game to NCAA points-per-game for all players who've jumped from college to the NHL since 1979:

That seems a little conservative, and we should take into account that Okposo isn't 20 years old yet. This chart shows the difference in PPG ratios by age: 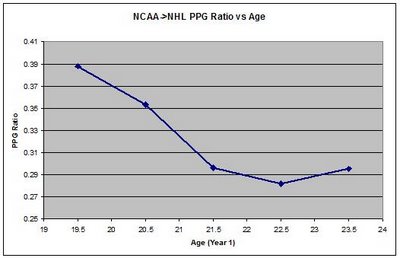 So we were probably 25% too pessimistic with our projection. Okposo is a good bet to pick up between 10 and 18 points in his next 40 games. That's low enough that the Islanders might just assign him to their AHL affiliate, and we won't see Okposo until next year.