Share All sharing options for: Shooting Percentage by Zone

I spend a lot of time looking at the NHL's data feed, and sometimes I forget that there's often more data available on ESPN's feed. In particular, while the NHL still only gives you shot distance but no angle information, this season, ESPN has the coordinates of every shot on goal. Here's last night's Anaheim-Colorado game, for example. This just serves to remind us that there's a lot more data being collected at every game than we could possibly imagine just from what's publicly-available.

At any rate, one of the things we'd like to know is how often a shot goes in from a given zone on the ice. This plot shows that percentage for even-strength and power-play situations: 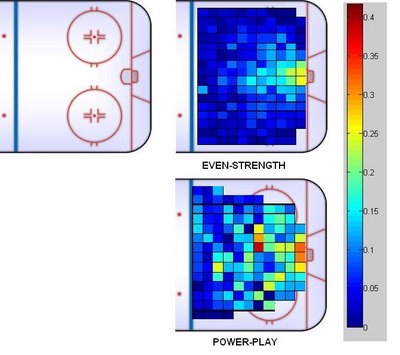 Note that if there were fewer than 20 shots taken so far this season in a given zone, it is not shown. Obviously, there's a tremendous amount we can do with this data, and I'm hoping to get around to that as soon as possible. In the interim, here are some sample shooting scatterplots, starting with the much-maligned Michael Ryder's even-strength shooting: 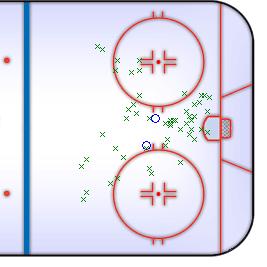 Compare to the somewhat inefficient Alexander Ovechkin at evens: 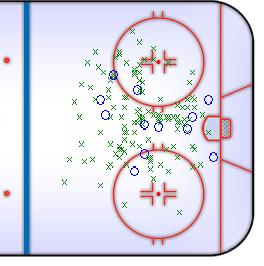