I've put together a simple first-order system to analyze goaltender performance. First, I calculated the probability of scoring from 2x2-foot quadrants using data from 2001 through last week's games: 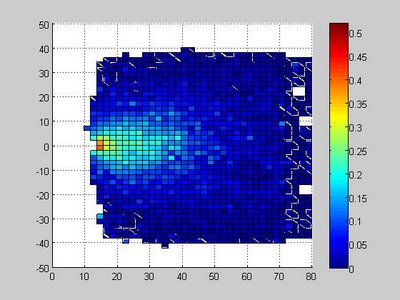 I then took every shot faced by each goaltender and calculated the number of goals we'd expect an average goaltender to allow is he faced the exact same set of shots. [Note that shot distances are relative to the end boards, not to the goal line.] This is obviously a coarse estimate: we have no information on whether shots were defended or screened, and because of the difference in the way shot types are recorded in different arenas, I haven't differentiated between them. [Yes, in hopes of improving the system, I am happy to accept critical comments!]

So as an example, Henrik Lundqvist has allowed 41 goals on 567 shots at 5-on-5, for a 927 save percentage. However, an average goalie who faced the 567 shots from the same locations would expect to allow 58.3 goals, for an 897 save percentage. On a per-60-minute basis, Lundqvist's Goals-Against-Average is 1.90 - 0.80 goals lower than an average goalie. I'll publish some charts for individual goaltenders so we can compare the best goaltenders to the worst in this metric.