Scoring rates go way up on the power-play, making it a goaltender's toughest assignment. (Ray Emery fighting Andrew Peters doesn't count.) To quantify the difference, here's the same plot as we had for 5-on-5 play, except for 5-on-4: 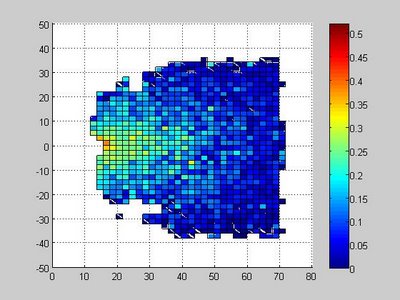 As you can see, the high-scoring zone is much larger than it is for even-strength play. You can also see that teams don't take a lot of shots from tough angles (I excluded any quadrants with fewer than 10 shots in the last six seasons, resulting in some blank zones). So not only is it easier to score from a given spot on the ice, teams also take more high-probability shots, and average save percentages drop from 915 to 877.

I've reproduced the same chart as in the previous post, showing which goalies reduce their 4v5 goals-against-average by the most. Here we have a minimum of 30 minutes played, so one or two goals can skew the results considerably. Henrik Lundqvist again comes out near the top - is he really that good? Or do MSG scorers consistently report that the puck is shot from closer than it really is? [That's a subject for another post.]